Francesca completed our Online UX & UI part-time course in May 2021 and has since managed to secure a Junior Designer role at YaYa.

We caught up with her to see what she has been up to since completing her course and how the course helped her achieve her goals.

Looking back before you joined the course at Experience Haus, can you tell us a little bit about what you were up to and what led you to consider a course in UX/UI design?

I come from an illustration design background and for the last 4 or so years I’ve been working as a commercial illustrator, a freelance illustrator and also did a bit of art tutoring and teaching. So I’ve always loved design and had ended up in illustration, which I really love and still do on the side, but I was getting to the stage where I was falling out of love with it. I felt like I wasn’t using all of the skills I have within that role and wasn’t being pushed enough. I also missed working with people as it’s quite a solitary career. There were a lot of things that made me think this wasn’t complete enough and I could do more. So I had been looking into other areas of design and looking at graphic design, branding and other areas that interested me. I spent a long time looking into things and then the pandemic hit so all of that was put on hold. Then it was last year that a friend of mind recommended UX design. He told me it’s still design and is a growing area and seems like something he thought I would be interested in. So I did more research into it and then eventually led me to find Experience Haus. I also really loved the course I did – the Online UX/UI course – as it’s really great that it’s got both UX and UI rather than just one or the other, as a lot of other courses seem to just focus on one.

How did you come across Experience Haus? What made you choose to study with us?

I came across Experience Haus through a contact. I’m part of the Prince’s Trust charity and they’ve helped me out a lot with illustration stuff and I have a mentor through that. He then put me in touch with Matter of Form, who put me in touch with Amit, so there’s a link of people connecting me to the course! It naturally happened but it was through contacts that I heard about the course.

I’d been looking at the other courses on your website but the fact that this was both UX and UI together stood out to me. It eases you in, it’s not too much of a jump into something completely new and felt like it was right for the stage that I was at as a beginner but with some design experience. The fact that it was online was ideal.

Thinking about your time on the course… What did you want to achieve from your Experience Haus course?

The main goal was getting a job! But also strengthening my understanding of what UX Design and what UI is. I had been teaching myself before the course, but this was really nice to work with other people on a project as this gives you first hand experience of the role you would be stepping into.

What did you enjoy most about the course?

Definitely working with other people and getting a real client brief, but also I was interested to see how it would work online, but it totally did! I looked forward to each session so much and everyone was really lovely. It always felt like a really nice environment, even though it was on Zoom! It was a mixture of both having first hand experience on a live project, but also working with other people, learning new software as well.

What was your one big takeaway from the course?

I do feel using your network is super important and being open and flexible. Even if you have a certain direction of where you want to go in mind, just be open to other options. The role that I’ve started a few months ago isn’t just UX, it’s graphic design as well and UI, like a classic Junior role and that’s ended up being really ideal as I’m using skills that I had before the course and also skills I learned on the course. When I was applying for jobs I was open to anything that was out there, which ended up being a really good thing to do! 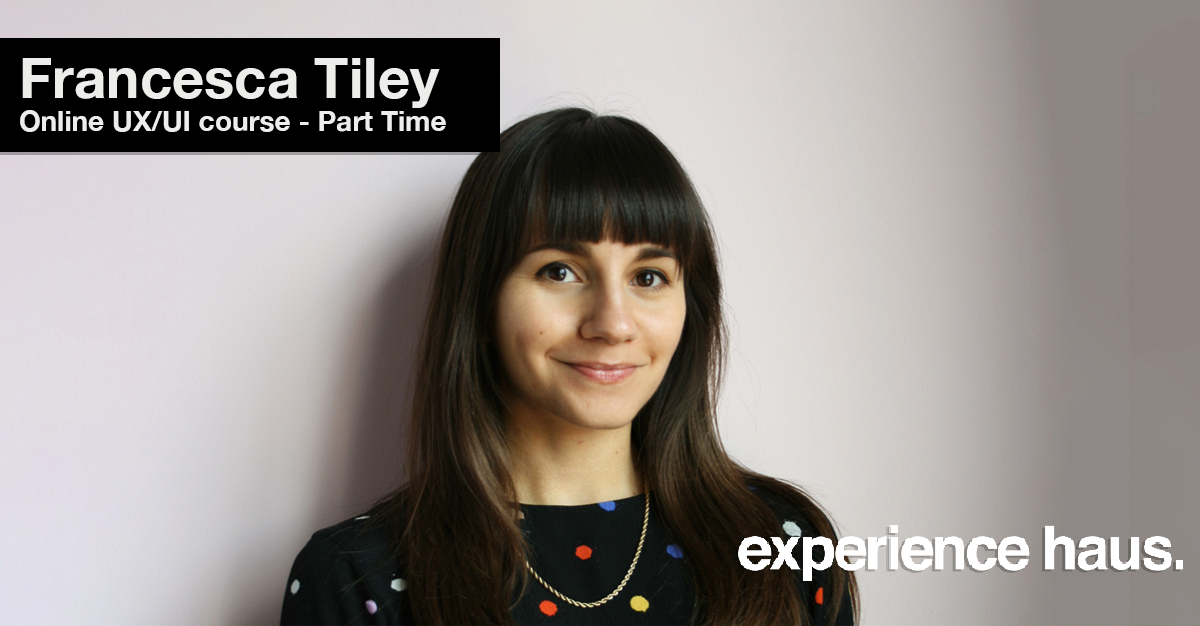 Turning now to your time post-course… Can you tell us a bit about what you’ve been up to since the course finished? What sort of things were you working on that led you to securing your recent UX Research & Strategy Project Coordinator role?

As soon as I finished the course over summer I was madly applying for loads of roles and applied for a UI internship at the company I’m currently working for. They’re called YaYa, they’re a digital agency. I didn’t know what to expect but ended up getting the internship and was there for two weeks and realised it wasn’t just UI, it was other things like graphic design and UX so it was really broad which was great. Then after two weeks they offered me a permanent role as a Junior Designer and I said yes! It’s a whole mixture of different projects and it’s really nice to be building on the skills I learnt at Experience Haus. I’m definitely still learning lots and think I’ve grown a lot since starting. Part of the reason I think I’ve been exposed to so much is because it is quite a small team as well.

Have you stayed in touch with your instructor or fellow Hausmates?

I haven’t really spoken to anyone on the course since finishing but I was in contact with my tutor Jon when I was first applying for jobs, but haven’t caught up with anyone since then!

Do you have any advice, or nuggets of wisdom for any one trying to break into the industry – anything you wish you had known beforehand?

Don’t be overwhelmed that you don’t know everything. It can feel like such a big field with so many new things evolving so rapidly, but don’t be overwhelmed by that. Being a hard worker and a team player and pushing yourself out of your comfort zone is a lot more valuable than being completely up-to-date with the latest plugin on Figma! Things are always changing, it’s more about your attitude so go into it being positive and enthusiastic and hardworking and that will benefit you in the long run.

Get in touch with Francesca

Break into a Career in Product Management

Product management roles are not just your typical 9-to-5 job. They are filled with excitement and the opportunity to drive change. As a product manager, you will have the chance …...

The Power of Storytelling

If you work within the creative industries, storytelling should be considered an important part of your skillset for the future. It is a versatile and valuable skill that can be …...

Social Impact: Why Experience Designers Should Get Involved

As an experience designer, you are in a unique position where you are tasked with creating meaningful experiences (and change) for users. But what happens when those experiences can also …...

A more innovative and immersive approach to remote study. Learn the UX & UI process in just 10 weeks whilst working on a live client brief with a real client.

The final project is presented to the client, where students deliver a presentation summarising their journey, process, and work throughout the ten-week course.

In order to encourage discussion and collaboration we limit our class sizes to 12 students. Learn more about the course here.

Subscribe to the Experience Haus monthly newsletter. We'll keep you updated on everything we have to offer.

Manage Cookie Consent
To provide the best experiences, we use technologies like cookies to store and/or access device information. Consenting to these technologies will allow us to process data such as browsing behavior or unique IDs on this site. Not consenting or withdrawing consent, may adversely affect certain features and functions.
Manage options Manage services Manage vendors Read more about these purposes
Customise
{title} {title} {title}