We caught up with her to see what she has been up to since completing her course and how the course helped her achieve her goals.

Looking back before you joined the course at Experience Haus, can you tell us a little bit about what you were up to and what led you to consider a course in UX/UI design?

I did the course with you from October – December 2020. The year before that in 2019 I had just quit my job in London and we were moving up to Scotland. I worked at a music company called Vevo. I was doing label relations (essentially client relations!) so I looked after Sony and then other independent records (like Domino Recording where I worked prior to Vevo). Part of that role was also production so making videos. Totally different to what I’m doing now!

I knew I wanted to do something different. When I came up to Scotland I genuinely thought I’d get into production. I got a job in March 2020 but then because of Covid it kept getting pushed back before it finally fell through! I then started doing customer service at Amazon just to pay the bills, but it meant I could also do random stuff on the side. I reached out to other people and caught up with a friend I used to work with who now works at MadeBrave. She’s a Project Manager and we were what I like and what I do and she said I’d be really good at creating things eg. creating assets, doing production etc. I think she might have mentioned UX in her list of things I would suit and I liked the idea of it. I reached out to a friend who had done a 6 month course so did some research, read around the subject and then found Experience Haus!

What made you choose Experience Haus?

I just Googled various providers and found Experience Haus. I asked to speak to someone directly as I found the course interesting but I didn’t know if I could do it. I had seen some courses that were really expensive and all you did was turn up and watch videos! I’d done that sort of course before and it just didn’t work for me so it was really important joining a live course.

There were a number of things that led me to do the course at Experience Haus: the small class size, the live project to put on our portfolios and the cost. Some courses I had seen just didn’t seem achievable for me with how much they were asking for. I hadn’t spent money on my personal development for ages so it was an important thing for me to commit to. I also chatted to someone who had done the course before who had done a complete career pivot similar to myself and that really helped.

Thinking about your time on the course… What did you want to achieve from your Experience Haus course?

The main thing was getting a job in UX but I knew this wouldn’t happen straight away, so having a good portfolio and a case study to add to my portfolio was key. I also knew about a small amount of Figma before I started the course but I wanted to get more familiar with it by the end of the course.

What did you enjoy most about the course?

Definitely being able to work in a team! It’s daunting to begin with being put with people you don’t know and not knowing whether you’ll work well together, but it was genuinely fun getting to know new people as it was a time where you weren’t able to go out and meet new people. At the beginning of the course you get imposter syndrome thinking you know nothing and that everyone else knows everything, but once you meet everyone you realise they’re all thinking the same thing!

The other thing I really enjoyed was learning so many different skills. As I mentioned, I did know a bit about Figma before but now I’ve learnt some of the other skills I love it! I could spend hours on it and just get lost.

What was your one big takeaway from the course?

Do as much as you can in the time you are given. I was working full time and weird hours at Amazon at the time and I knew other people weren’t working at all so it was just making sure I dedicated the spare time I had to it. It can be exhausting but you need to put the time in. You’re being taught a lot of things but half of it comes from what you do outside of class as well. It is important to have that right mindset.

Right after the course, make sure you write up your portfolio immediately as I think once you don’t do it, you never will. I sunk my teeth into it and spent a week after the course just focusing on getting it done. 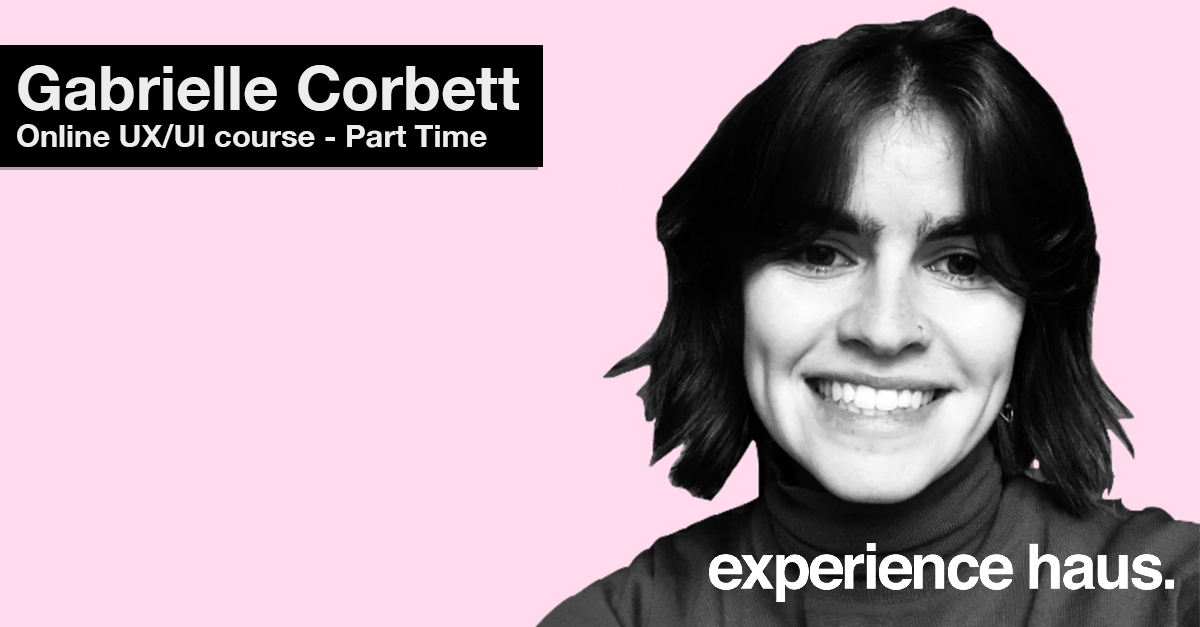 Turning now to your time post-course… Can you tell us a bit about what you’ve been up to since the course finished? What sort of things were you working on that led you to securing your recent UX Producer role?

As soon as I finished the course, I was still working weird hours and didn’t get a holiday, but did three freelance projects straight away. One was through a friend who was consulting at this start up called Huli (a start up that’s similar to Strava) and they needed a content audit which was fun to do. Then through Amit I got another job from that which brought me into January 2021, then I applied for a few different jobs and managed to secure my current role! I started at Screenmedia at the end of February. They have a UX team and a planning team, but I’m more part of the UX team at the moment. The nice thing about the company was they looked through my CV to see the skills I could bring from previous work experience and apply them to the role.

Can you tell us a bit more about what your current role entails?

I’ve been doing stuff I didn’t do on the course like content audits, content inventory, lots of spreadsheets and learning about software like Screaming Frog. At the moment it’s very website based so I spend a lot of time populating websites, learning about personalisation and how everything works together. It’s been a real mix!

Have you stayed in touch with your instructor or fellow Hausmates?

We carried on talking for a bit but sadly we don’t talk as much anymore. We were lucky though as it was a really fun group and we all got on. It might have been easier if I was in London but I’ve still managed to find UX people to talk to in Scotland.

Do you have any advice, or nuggets of wisdom for any one trying to break into the industry – anything you wish you had known beforehand?

The main thing is knowing you will need to put the extra hours into the course as well as afterwards as it’s only 3 months! I started creating a resources and guide table on Notion with loads of links and I share that with people who have recently started in UX. It is worth letting people know before you get into UX as you’ll be surprised at how many people are in it or know someone in the industry.

Before applying for jobs I changed my website and LinkedIn to be more catered towards UX. When setting these up you should sell yourself on the things you’ve done before and then definitely include the fact you’ve done the course. Once you start applying for jobs, don’t get so caught up on job titles because every agency you could work in or projects you work on could be called a number of different things. It doesn’t matter what your title is as long as it has UX or the role feels right to you.

Get in touch with Gabrielle

Break into a Career in Product Management

Product management roles are not just your typical 9-to-5 job. They are filled with excitement and the opportunity to drive change. As a product manager, you will have the chance …...

The Power of Storytelling

If you work within the creative industries, storytelling should be considered an important part of your skillset for the future. It is a versatile and valuable skill that can be …...

Social Impact: Why Experience Designers Should Get Involved

As an experience designer, you are in a unique position where you are tasked with creating meaningful experiences (and change) for users. But what happens when those experiences can also …...

A more innovative and immersive approach to remote study. Learn the user experience & interface process in just 10 weeks whilst working on a live client brief with a real client.

The final project is presented to the client, where students deliver a presentation summarising their journey, process, and work throughout the ten-week course.

In order to encourage discussion and collaboration we limit our class sizes to 12 students. Learn more about the course here.

Subscribe to the Experience Haus monthly newsletter. We'll keep you updated on everything we have to offer.

Manage Cookie Consent
To provide the best experiences, we use technologies like cookies to store and/or access device information. Consenting to these technologies will allow us to process data such as browsing behavior or unique IDs on this site. Not consenting or withdrawing consent, may adversely affect certain features and functions.
Manage options Manage services Manage vendors Read more about these purposes
Customise
{title} {title} {title}